SATURDAY MORNING AT PETAK 9 with @jktonfoot.

Enjoying your morning dose of coffee at the 1972’s Kopi Es Tak Kie. Wandering around the picturesque Gang Gloria, Pancoran, and Jalan Kemenangan. Flashing your smile to those you meet along the way more often than flashing your camera. Letting your senses guide you around the multicultural neighborhood, as you’re exploring various stalls offering authentic foods, local drinks, and traditional herbs…

If it sounds like something you’d like to have on your Saturday morning, just bring your smile and curiosity this Saturday (17 May) to Glodok TransJakarta shelter, at 8 am. You’ll meet novi kresna murti (@novikresna), hanny kusumawati (@beradadisini), and i who will wander around with you and open ourselves up to embrace this part of the city on foot for about 2 hours.

‘there is someone who always thinks you are their universe, and how much you mean the world to them.’ a rainy note that i got from a special friend of mine on valentine’s day. he’s definitely my favorite person. i am a thankful friend too.

my travel story in chefchaouen, morocco, ‘yang mengenal dirinya, yang mengenal tuhannya’ has published in more indonesia magazine, may 2014. i should warn you, it’s not a guide article.

i love antoni gaudi’s works. i love him.

this is a dream about trip around the world. #travel

brrrmmm! an harajuku pretty woman riding her blue motorcycle on the most extreme teenage cultures and fashion styles street in tokyo, japan: harajuku. harajuku refers to the area around tokyo’s harajuku station, which is between shinjuku and shibuya.

Look at the date. 1705. Yes, thank you. Maria Sybilla Merian (1647-1717) was a fabulous naturalist and scientific illustrator. Everything she did was beautiful, but also odd. The above lizard, for example?

In her time, insects, her particular interest, were viewed as “beasts of the devil”

Merian was intrigued by metamorphosis, beginning with butterflies, and moving on to life stages of insects, with a lot of side interest in lizards, and various other creatures. Her early work was often used as patterns for embroidery – but clearly, she was interested in science as well as beauty.

Daughter to Matthaus Merian the Elder, who was a noted Swiss engraver and publisher, she was also stepdaughter to Jacob Marrel, a still-life painter. Clearly, both traditions moved through her work. When she was eleven, she engraved her first copperplate for illustration.  She married her father’s apprentice in 1665, when she was 18, and had two daughters with him. (Though interestingly, she seems not to have ever changed her surname.) 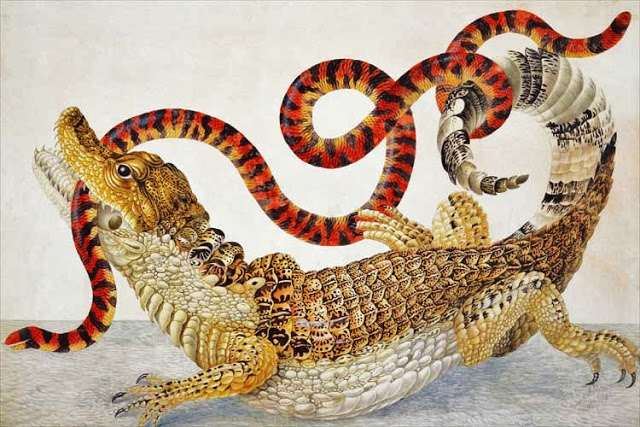 In 1686, she moved to the Netherlands with her mother and daughters, and in 1690 divorced her husband.

In 1699,  the now 52-year-old Merian – having  resided in the home of the Governor of the Dutch colony of Suriname and observed his tropical specimens (I have no idea quite how this happened – was there romantic involvement? Maybe?) Merian sold most of her belongings in order to travel to Surinam with her youngest daughter Dorothea. The result was the extraordinary Metamorphasibus Insectorum Surinamensium.

She says – rather amusingly, given her clear passion for same:

“So I was goaded to undertake a huge and costly trip, traveling to Suriname in America, a hot and humid land where swarms of insects are there for the capture.”

She spent two years in Surinam, before returning to the Netherlands due to malaria.

After Merian’s death in 1717, her daughters continued to produce fabulous work in the entomological field. Six plants, nine butterflies, and two beetles bear her name.
See this catalog from the Getty Museum’s 2008 Exhibition of Merian’s work.
And more biographical information here.